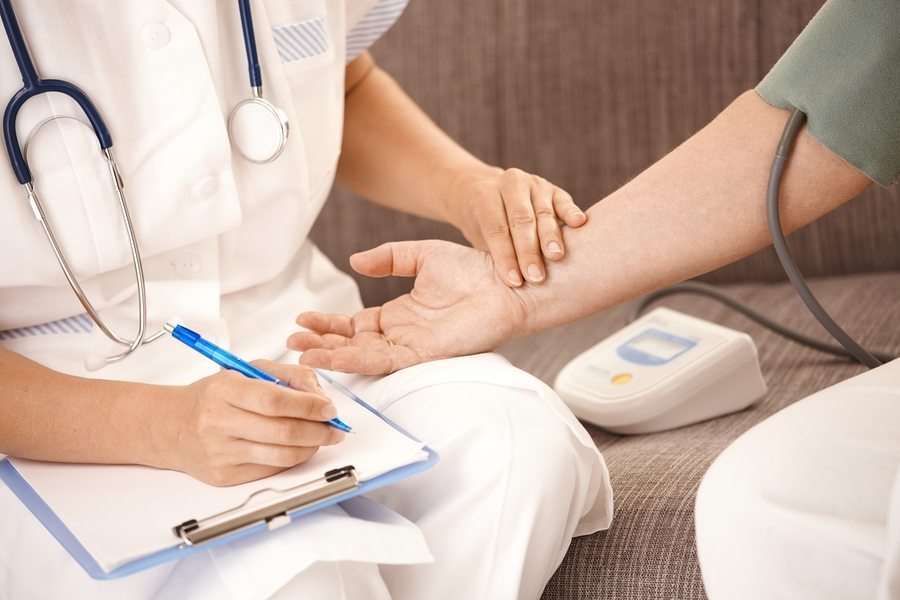 With a bustling population of nearly 400,000, it’s no surprise that Arlington is one of the Texas economy’s biggest drivers.  Collectively, Arlington’s top 10 employers put more than 37,000 people to work — enough to populate a mid-size town.  Unfortunately, some of Arlington’s biggest employers are in America’s most dangerous industries, according to government statistics.  If you or your spouse got hurt on the job, an experienced Arlington TX personal injury lawyer of Queenan Law may be able to help you get compensation for your injuries.

With approximately 8,250 employees, Texas Health Resources is the top employer in the city of Arlington.  Operating more than two dozen hospitals and medical facilities, including the Texas Health Arlington Memorial Hospital, Texas Health Resources is a major non-profit organization within the healthcare industry — which, according to the Bureau of Labor Statistics (BLS), has more nonfatal injuries and illnesses than any other industry in the United States.
According to a 2015 BLS survey on occupational injuries and illnesses, which examined data from the year prior, workers in the healthcare and social assistance industries experienced more nonfatal job-related injuries and illnesses than workers in any other field, including construction and mining. 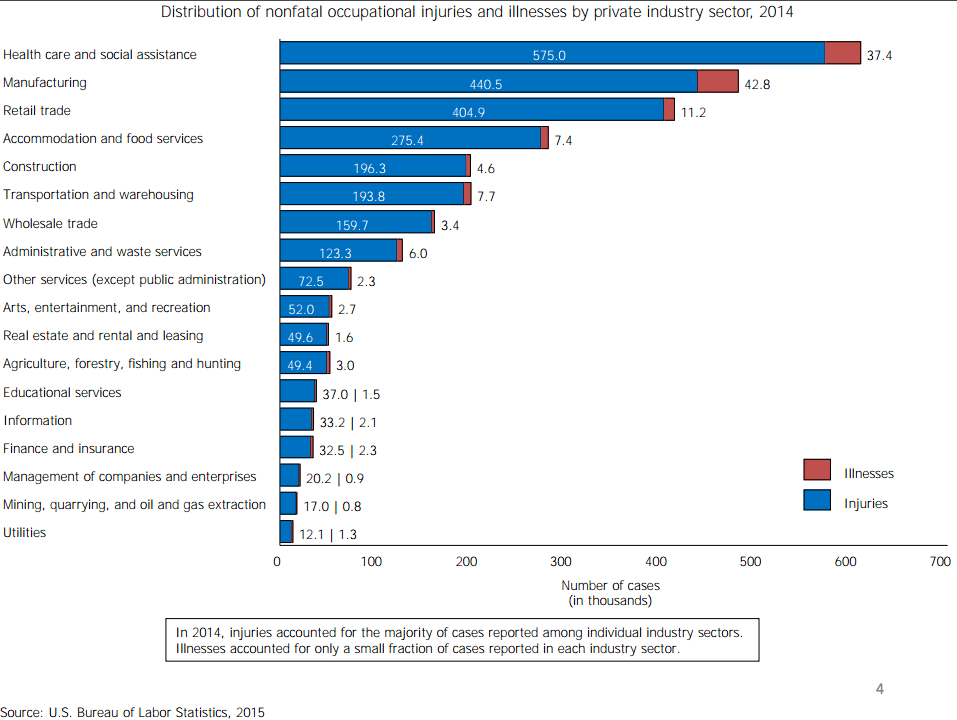 The vast majority of the incidents reported in the survey were injuries, not illnesses.  There were 575,000 nonfatal injuries in the U.S. healthcare industry in 2014, as compared to about 37,400 cases of occupational illness.  To put that figure into perspective, the second leading industry, manufacturing, reported 440,500 nonfatal injuries (but had a higher number of occupational illnesses, with approximately 42,800 total cases reported).

The healthcare industry also has one of the highest rates of injury, which is another meaningful measure of an industry’s dangers.  According to the same BLS survey, healthcare and social assistance has the third-highest incidence rate for nonfatal illnesses and injuries in the private sector.  Between four and five healthcare employees per every 100 are injured, compared to, at the extreme low end of the scale, less than one worker per every 100 in the finance industry. 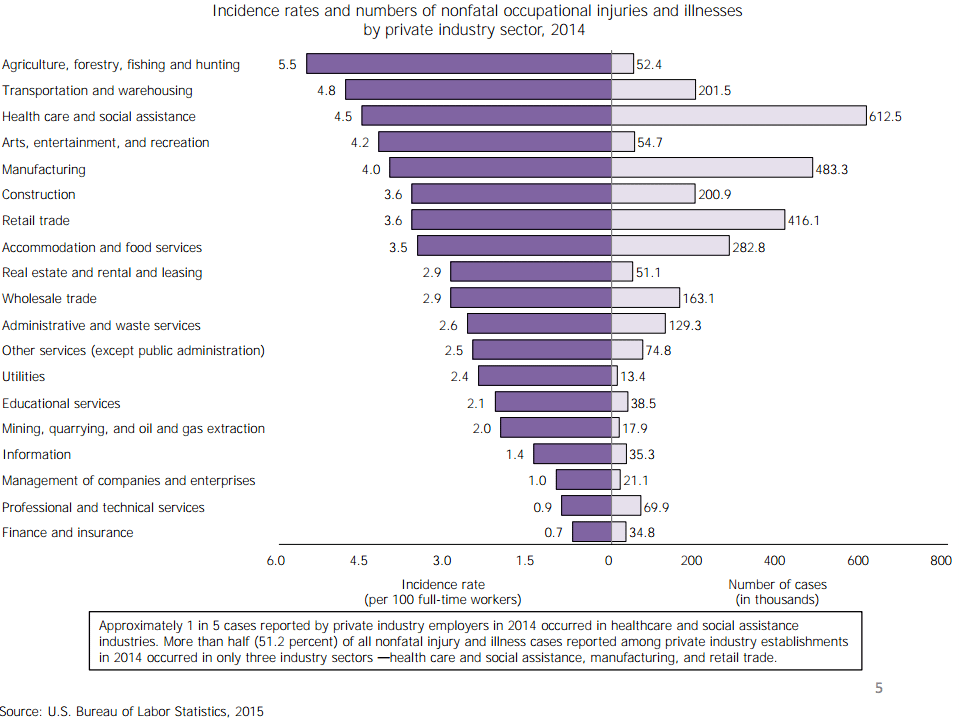 According to the same set of figures, only two industries had higher rates of nonfatal injury and illness nationwide: transportation and warehousing, which also has a rate between four and five per 100 (4.8 as compared to 4.5), and the combined industries of fishing, hunting, agriculture, and forestry, which have a rate of 5.5 injuries per every 100 workers.
Even when illnesses were removed from the equation, and injuries were analyzed independently, healthcare still had the third-highest incidence rate, albeit slightly lower (4.2 per 100, instead of 4.5).  The same was true when illnesses were isolated, in which case the incidence rate was 27.6 per every 10,000 workers (about 0.3 per every 100).
The U.S. healthcare industry also topped the BLS’ 2014 list for most days away from work due to nonfatal illnesses or injuries.  Over 164,000 healthcare injuries resulted in the victims taking time off of work, compared to 126,000 manufacturing injuries.  This suggests a high number not just of injuries, but injuries that were severe enough to interfere with victims’ ability to work.
According to a separate 2014 BLS report, approximately 27,800 of the nation’s 575,000 healthcare industry injuries occurred here in Texas, primarily among hospital workers (12,900 cases) and employees of nursing homes and long-term care facilities (7,000 cases).  A smaller number of injuries occurred among Texas social workers: 1,800 overall, most of which (800) related to vocational rehabilitation services. 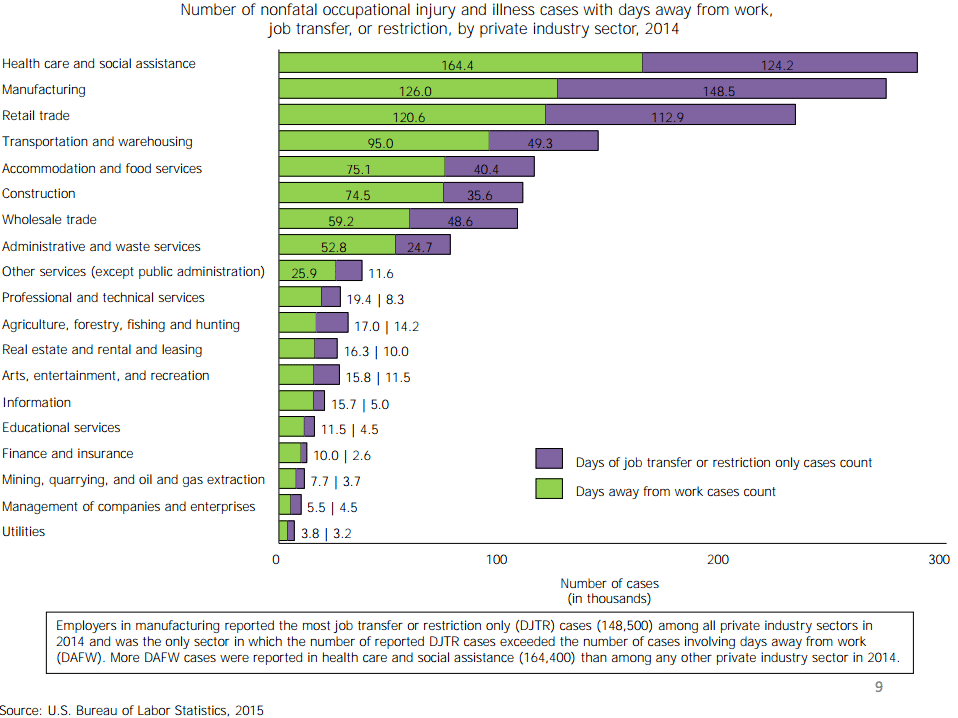 Arlington is a great place to work, but no matter how cautious you are at your job, certain industries will always pose a higher risk of injury than others.  However, if you or one of your family members got hurt at work at a hospital, nursing home, or other healthcare facility in Arlington, Texas, the workplace injury attorneys of Queenan Law may be able to help.  Our skilled legal team has over 20 years of experience fighting to help hard-working Texans get compensated for employment injuries, including Houston oil rig accidents and construction accidents.
Our personal injury law firm handles workers’ compensation claims involving slip and fall accidents, automotive accidents, back injuries, bone fractures, scars, head injuries, and other matters.  You may be feeling overwhelmed right now, but you can turn to Queenan Law for answers to your legal questions.  To talk about your Texas job injury claim in a free and confidential legal consultation, call Queenan Law right away at (817) 476-1797.