Mailmen Beware of the Neighborhood Dog: Texas Leads the Nation in Dog Bites 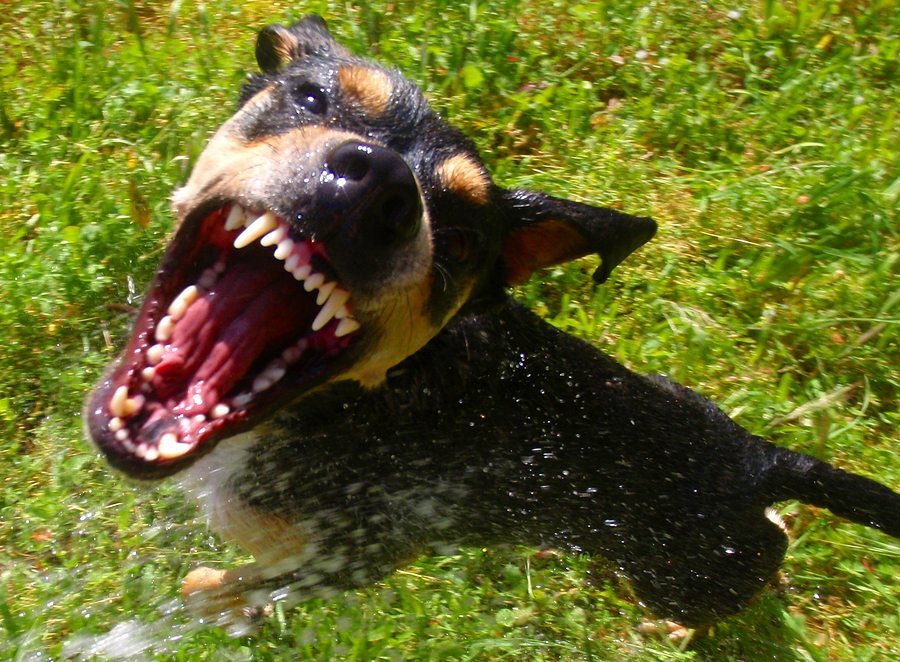 Dog bites have made the news over the last several years as a problem facing every state in the nation. While the dog may be man’s best friend the Centers for Disease Control found that these lovable pets bite nearly 4.7 million people every year. Sometimes these bites are minor injuries, however, the 800,000 dog bite victims who had to seek immediate medical attention following a dog might tell you a different story. Tragically, dog bites and attacks lead to 34 fatalities in 2015.
Our Dallas dog bite injury lawyers discuss dog attack statistics and laws in Texas.

How Many Dog Attacks and Bite Injuries Happen Each Year?

Texas has four cities in the top twelve that rank for an increase in dog bites. Specifically, postal workers seem to be at an increased risk of being bitten by a dog in Texas. In a report released before National Dog Bite Prevention Week from May 15 through May 21st, the Postal Service stated that there were more than 6,500 postal carriers who were attacked by dogs in 2015.  The top cities for dog bites according to the Untied States Postal Service are:

However, it is not only the local postal worker who is at risk according to other sources.  Texas has earned a bad reputation nationally for dog bites. In fact between January 1, 2005, and February 17, 2013, there were 34 dog bite fatalities all across Texas. This has earned Texas the unenviable distinction of leading the nation in fatal dog attacks.  While it is not always appropriate to typecast a certain breed of animal 76% of all fatalities during this time period were attributed to Pit Bulls.

In 1974 the Texas Supreme Court affirmed that Texas will follow what has been called the “one bite rule” in the case of Marshall v. Ranne, 511 SW 2d 255 (Tex: Supreme Court 1974).  When the Texas Supreme Court ruled on this case the justices specifically relied on the Restatement of Torts section 509. This section sets forth the traditional doctrine that will hold a person liable for harm that is inflicted by their domestic animal. As it applies to dog bites, this doctrine holds that a victim can recover compensation from the owner, harborer or keeper of a dog if (a) the dog previously bit a person or acted like it wanted to, and (b) the defendant was aware of the dog’s previous conduct. If either of those conditions are not met, however, the victim cannot employ this doctrine as a ground for recovery.
However, it is important to note that under the language of this case and subsequent cases that unless the dog’s owner knew of the animals vicious tendencies then the owner cannot be held liable.” In effect a dog who has always been friendly and gentle who bites a person, one time may be excused by the court. Under this rule, a dog owner can be shielded from liability for a dog bite unless the victim can prove that the owner knew of the animal’s dangerous propensities.
While Texas does not have a dog bite statute, which has been largely criticized as not in line with standard American jurisprudence, the one bite rule has been firmly in place for several decades. While the one bite rule has allowed many dog bite victims to recover for their injuries, dog bite victims can also recover under the familiar negligence standard. Texas also allows a dog bite injury victim to recover compensation on the ground of negligence. Marshall v. Ranne, 511 S.W.2d 255, 259 (Tex.1974). In the Marshall case, the Texas Supreme Court stated that an owner of a non-vicious animal can be “subject to liability for his negligent handling of such an animal.” As it pertains to dog bites, negligence is a breach of the ordinary care that a person owes to all others they interact with.  It is the absence of the kind of care a reasonably prudent and careful person would exercise under similar circumstances. If a person’s conduct in a given circumstance doesn’t measure up to the conduct of an ordinarily prudent and careful person, then that person is negligent. For example, letting a stray dog into a day care center is negligence. “To recover on a negligent handling claim, a plaintiff must prove: (1) the defendant owned or possessed an animal; (2) the defendant owed a duty to exercise reasonable care to prevent the animal from injuring others; (3) the defendant breached that duty; and (4) the defendant’s breach proximately caused plaintiff’s injury.” Allen ex rel. B.A. v. Albin, 97 S.W.3d 655, 660 (Tex.App.-Waco 2002, no pet.). The negligence cause of action makes it unnecessary to prove that the dog previously bit a person or acted like it wanted to. Id.; Dunnings v. Castro, 881 S.W.2d 559, 562-63 (Tex .App.-Houston [1st Dist.] 1994, writ dism’d).

What Should You Do If You Were Bitten by a Dog in Texas?

While dogs may be very much a part of the American family, this has not stopped them from injuring many people every year, even those in their own home. There are many reasons why a dog may bite someone. Dogs may feel anxious, stressed, or scared, which can cause them to lash out and bite someone. However, in other instances, there seems to be no reason why the beloved family pet became aggressive and bit someone.  If you have been the victim of a dog bite, here are some of the things and steps you should take:

Seek medical attention – After a dog bite, some people try to analyze the situation or even play doctor, and think that they do not need to seek medical attention for their injury. However, this is never a good idea. Only a trained medical professional can properly diagnose and examine the extent of an injury and you should rely on their professional training and advice. Dog bites can cause severe lacerations which may require stitches, in addition, a dog bite can easily become infected if not properly treated. A general rule for a dog bite is that if the skin has been broken you should seek immediate medical attention.

Contact the appropriate authorities – As explained above, in Texas, we follow the One Bite rule, which means that every dog who has not displayed any violent or vicious characteristics essentially is in the clear if they bite one person. However, it is important to report a dog bite to the appropriate authorities.  The local authorities and animal control agencies should be contacted immediately after a dog bite.  A dog who has bitten someone needs to be observed for signs of rabies and quarantined.

Hopefully, you never find yourself the victim of a dog bite. However, if you do, do not hesitate to seek medical attention and contact the local authorities. Dogs can be a wonderful part of your family, but when they injure you or someone else, they can cause real harm.

Contact a Dallas, Texas Dog Bite Attorney If You Were Bitten or Injured

Queenan Law represents personal injury victims across Texas, including Arlington, Fort Worth, Dallas, and Houston.  Our practice operates under the firm belief that a society thrives when justice prevails.  Every member of our law firm is devoted to his or her role in advancing fairness and advocacy for injury victims, and will closely scrutinize every detail of your accident to build the most compelling case possible.  We approach every case with one goal in our minds: to obtain the compensation our clients deserve.
Even if you are unsure whether you have a case or need a Dallas personal injury lawyer, we encourage you to contact our law offices for a free, friendly, and completely confidential consultation regarding your legal matter.  Call Queenan Law at (817) 476-1797 to get an assessment of your case today.