Divorce is usually a very emotional event that can affect you and your family for years to come. Divorce is also a legal matter that can have serious long-term consequences. When you are about to begin the divorce process you may have many questions. What are the grounds for divorce? What are the procedures are about to unfold? You should consider all of these questions before you begin the divorce process. While you may have many other questions, this page will provide you with the basics of divorce in Texas.f

At the Queenan Law Firm, our Dallas divorce attorneys tenaciously pursue every case.  Regardless of whether you come to us for assistance with a divorce, a custody dispute, a conflict over property distribution, or you simply have questions about what to include in your prenuptial agreement, we will educate you about your responsibilities while advocating for your rights to the fullest extent possible.  If contention exists between you and your spouse, we aim to use our litigation skills to resolve the dispute in your best interest and that of your children.

What are the Grounds for a Divorce in Texas?

The Texas Family Code contains most of the laws, which govern divorces and other family law matters in the State of Texas. This code establishes that there are seven grounds upon which a divorce may be granted. However, since the no-fault divorce on the ground of insupportability was introduced in 1969, the other traditional grounds for divorce are rarely encountered.

Texas law allows for both “fault” and “no-fault” divorces. However, in the event that one spouse is the reason that the marriage is ending, then the court may consider that persons conduct when they are considering equitable division of the assets. Under a no-fault divorce, one spouse alleges that the marriage has become “Insupportable. Under Texas law, a divorce may be decreed without regard to fault if the marriage “has become insupportable because of discord or conflict of personalities that destroys the legitimate ends of the marriage relationship and prevents any reasonable expectation of reconciliation.”  A no-fault divorce is commonly seen as a more gentle form of divorce. This is because under the no-fault system a spouse who is seeking a no-fault divorce does not have to point to any wrongdoing from the other spouse but is merely alleging that they no longer are able to get along with their spouse and that there is no opportunity for them to resolve their problems.

Divorce cases tend to be some of the most contested forms of legal proceedings. It is very common for divorces to go through multiple stages at the court.

What are the Basic Steps for Filing for Divorce?

While every divorce is different the Texas Legislature has established a general guideline for how cases should proceed. However, you should be aware that each divorce case is different and depending on the relationship you have with your soon to be former spouse the process could be slightly different. Generally, a divorce proceeding follows the following steps:

After the initial filing, service, and answer there is a period of time where the case is going through the court system. Some of these events may include:

A Court cannot grant a divorce until the Petition for divorce has been pending for at least sixty days. It is during these sixty days that many of the abovementioned events happen. Sometimes this period allows the parties to rethink and reexamine their situation, or it can also be a good time to allow the parties to reach their own agreements concerning marital property, spousal support, and child support. 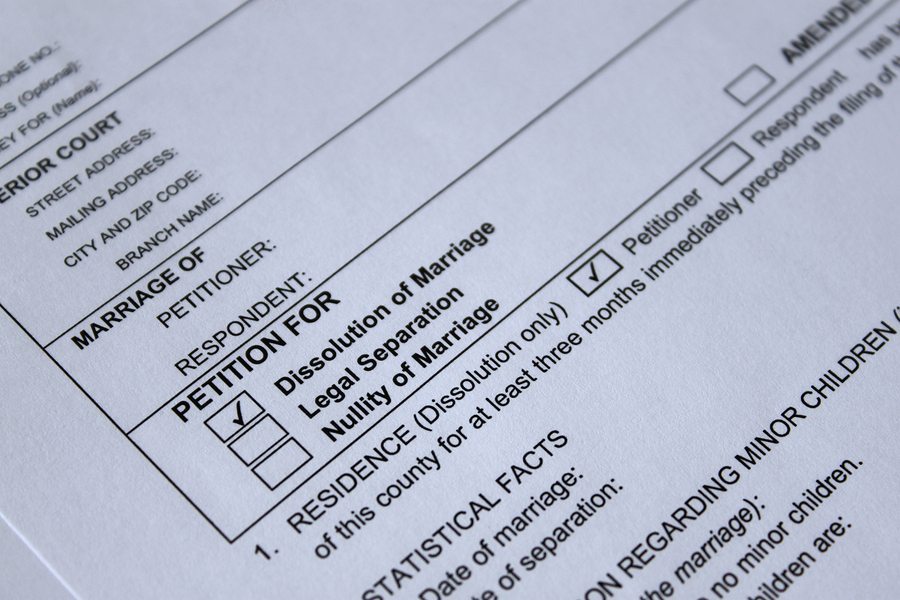 How does a Divorce Proceeding End?

If you and your spouse have worked out many of the details on your own and are coming to the court with a simple, uncontested divorce, the judge may grant a divorce after hearing testimony as to the terms of your divorce. This is sometimes known as a “prove-up.” However, if your divorce involves contested issues, such as child support, alimony, and property division then the process of receiving a divorce can be longer.  Your divorce is considered final and binding as soon as the judge signs and dates the Final Decree of Divorce.

If You Are a Party to a Divorce Proceeding in Texas, our Lawyers Can Help

To set up a confidential legal consultation about your family law matter, call the Queenan Law Firm at (817) 476-1797.  With more than 20 years of legal experience successfully representing clients throughout Texas, our attorneys are always eager to put our knowledge and skill to work for you.